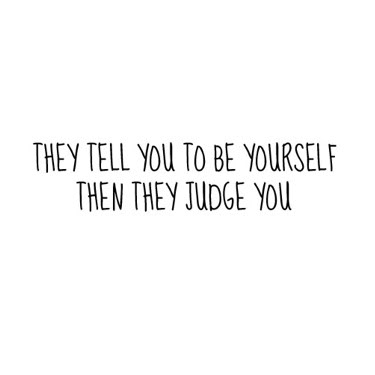 So I know this girl who happens to be a very close relative of mine, and she is “a bit on the fat side” if judged by the standards the society has set.

Everyone has made her believe that she is unfit for society and that there is no one who wants to marry a ‘fat’ girl. And this has made her so conscious of her diet that she is not eating what she wants to eat and what she needs to eat for her health, instead exercising day in and day out.

And I also know a girl who, on the other hand, is a bit slimmer than the standards people have set.

Everyone around her tells her that she needs to put on some weight because soon her age to marry will pass, and then she’ll have to spend the rest of her life alone. They are not telling her these things so that she might improve her health, but only trying to fit her into an ideal shape for some prince to marry! She is continuously eating and eating just to meet the standards of some ‘aunty’ who, if the girl is lucky enough, will go and recommend her to a rich bachelor somewhere.

Both situations have made me think that while not all fingers are of the same size, we are bent upon stretching the shortest finger; after all, it has to be similar to the rest- doesn’t it? In the process, we don’t bother to give a thought to whether the finger might break.

Personally, I can think of quite a few practicing Muslim girls who are well deserving of good people, but they are not getting married just because a ‘bahu’ (daughter in law) is supposed to be a show piece and she cannot be someone who covers up. Won’t look good when the family is invited out to dinner- right? What will people say?

My words should not be misunderstood to mean that I am against the right of men to choose their spouses on the basis of physical beauty.

But the fact that I want to highlight is that we have made physical beauty the sole judge while searching for an appropriate spouse. There is no importance laid upon good character, piety, religious beliefs/personal beliefs, gratitude, patience, and other moral values. Everyone is running behind the physical self, not understanding that the physical body is as mortal as anything else, and deteriorates with age.

By this we have not only lost our focus from beautifying our inner self but we have also put people’s self-esteem at a higher risk. Our approach towards life is far too idealistic to last longer than the initial wedding day. Dreaming of Prince Charming, or Cinderella, can never make us happy- because while Cinderella never existed (never walked the planet in fact), there are plenty of other ‘normal’ people who do exist. And it is high time that we stopped judging other people using our preconceived notions of a perfect spouse, friends or society.

Allah already knew how far the consequences of these standards could go, that is why He set a very different, and a much higher standard for us to accomplish.

The Prophet of Allah was narrated to have said:

“Indeed Allah does not look at your appearance and your wealth, but He looks at your hearts and your deeds” [Narrated by Muslim]

The problem I’m trying to highlight here is not only with those ‘aunties’ who are google-searching a model bride for their son, but also with those girls who are not accepting themselves as they are and are struggling to become the billboard models they look up to.

May Allah make us all happy and satisfied with what He chose us to be and to understand this statement of His:

“We have certainly created man in the best of stature.”

5 thoughts on “Who sets the Standards, anyway?”