Guest writer Sara Ahmed pens down the inspiring story of John Fontain, as heard from him at the WOC 2014 event:’Story Night with the Stars’.

John Fontain was born in a working-class Christian family in Manchester.  As a young boy, he would always make an intention in Church that he was praying to God alone, proving the fact that children are born on the fitrah (sound nature). At seven, he was sure that there was something amiss in Christianity when the priest changed the chorus lyrics he had written from ‘Jesus and God’ to ‘Jesus is God’. At the age of fourteen, with a growing passion for music, he became a professional jazz singer, travelling to places and performing in sports stadiums, hotels etc. With a good income and the drive to become the most famous jazz singer in the country, he naturally did not feel the need to attend university!

When he was eighteen, he struck ‘diamond’ deals with some of the West African immigrants who had come to England, and thus, went to visit Sierra Leone in West Africa. On his way, he was stuck in Senegal, penniless. Seeing his plight, a Muslim hotel manager offered him shelter in his own home. During his stay, John marveled at the courteous mannerisms of his host, and recalls that when he first heard the Azan, it was as if ‘his heart was ripped out of chest’. He would watch his Muslim hosts offer their prayers; this brief period in Senegal was his first positive impression about Islam.

Back in London, he enrolled in a highly selective and competitive course related to the diamond industry. He then travelled to Sierra Leone multiple times, but even during times of bright business prospects, he felt something was missing. At this stage, he came across a ‘Muslim’ village in South Africa, which was notorious for witchcraft and communication with jinn. There, he actually saw women tying knots on strings in order to bring a person under the influence of jinn! Fortunately, one of his friends from Syria informed him that witchcraft actually went against Islamic injunctions and he handed him a copy of ‘Fortress of a Muslim’ (An authentic collection of Duas). When John started reading this book, he came across Surah al-Falaq:

‘Say, “I seek refuge in the Lord of daybreak

From the evil of that which He created

And from the evil of darkness when it settles

And from the evil of the blowers in knots

And from the evil of an envier when he envies.’

Here was a verse mentioning the very same practices that he had seen with his own eyes! Finding some reality in the Quran, he started to take Islam more seriously and started to learn about it. Though not yet having converted, he would pray in his own way and he even fasted during Ramadan! One day, while in Egypt, he went to a Masjid in Cairo to pray. When he was about to do so, his friend told him he could not pray until he had taken the Shahadah (testimony to faith). John was stunned at this point because, all this time, even having hung around with Muslim friends in England, no one had ever told him about the Shahadah, the actual entry into Islam, the passage of safety in the Hereafter! (Do we, as Muslims, even realize the great responsibility that we have of conveying the message of Islam?)

On a side-note, John also reflects that until that time in Cairo, he had not actually wanted to leave his old life, but when he himself took the initiative to whole-heartedly accept the Islamic way of life, it was then that Allah introduced the Shahadah to him! For us, it is a reminder that Allah surely facilitates for us only that path which we really want to follow.

John Fontain, renowned jazz singer and successful diamond trader, finally took his Shahadah in a Hardees branch in Cairo! Now, with his enthusiasm to guide the people of West Africa to the true teachings of Islam, he heads a flourishing organization called ‘Volunteer Sierra Leone’ which is currently managing 65 Muslims schools in that region.

May Allah Subhanahu Wa Ta’ala make him steadfast and bless him in his efforts. Ameen. 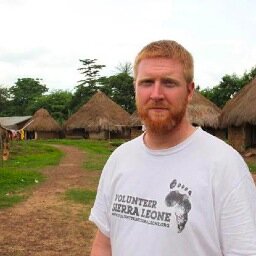