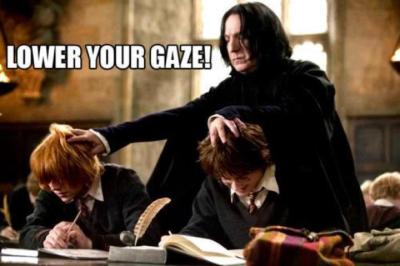 Lowering the gaze- yes, that is actually one of the forgotten commandments.

“You mean blue eyes! Woww.” She stared dreamily into space.

“I just can’t control myself when I look at him…” she swooned, gazing at the actor’s image on the novel’s cover page.

“That brother and his beard was so awesome! Ah! He was… ” she giggled as she described a guy.

It’s common to hear such statements even amongst seemingly religious girls.

Brothers, imagine yourself sitting in the midst of the busy street, waiting to complete some important tasks.  Suddenly, you see some beautiful young ladies.  You struggle to lower your gaze.  Their giggles and laughter tempt you but you try to control.  Now, you have two choices: to look around and feast your eyes, or to remain steadfast out of His fear and for the delights of Jannah.

Sisters, imagine lowering your gaze for this fleeting moment and then enjoying that pleasure of locking your eyes with your handsome husband.  Imagine this for both this beautiful world and the life to come in the Hereafter.  You will be his queen in Jannah if both of you enter the place together, Insha Allah.  Imagine being a queen amongst the Hoor al ‘Ayn!

You have a choice.  You always do.  And that’s what defines your present life and the life in the Hereafter.  How wisely will you choose?

Fighting against desires is tough, but not that tough when you do it, seeking the Face of Allah Subhanau wa Ta’ala alone.  Let’s consider the case of two sisters.

As she entered the building to complete some paperwork, her sight fell on a group of brothers who were there for some work too.  She had a choice: to continue to look at them intently or to lower her gaze.  And she chose to lower her gaze out of respect, modesty, fear and humbleness for her Creator.  She did it for her purity, and for seeking the pleasure of Allah.  She was covered and by doing so, she was not oppressed but in fact, she was liberated.  She lowered her gaze and perhaps they, theirs.  She felt light.  She felt satisfied.  She felt liberated and at peace.

And the other one:

As a Muslim woman, I can’t imagine myself staring at random men with desire and then getting married to another man.  I can’t imagine myself chit-chatting with many men and then talking to my husband.  In fact, I would love to lower my gaze and protect myself against lustful eyes out of His fear and then to see the blessing in the relationship with my husband.  At the same time, I can’t imagine my husband doing the same to me.  How beautiful your husband or wife would be to you – unique in their own way, without any parameters to measure the beauty with, since they would be the only one for you!  How wonderful would be the bond and how beautifully the spouses would find repose in each other!

Some people might think that this is such a trivial issue whereas we have big things to deal with in the Ummah.  I say to them: for dealing with big things, you need to work on ‘small’ things first and specifically on your seat of Imaan – the heart.  Do you really think you would be able to deal with those big issues when your heart is stinking with sins and enveloped in darkness?  Do you think Allah’s help will come to you while you are habitually disobeying Him?  It’s not about how trivial something may seem to you; it’s about racing to reach the highest level in Jannah.  Who knows by giving up this sin of yours, Allah may envelop you with mercy and raise your station in Jannah, insha Allah!

So, let your beautiful eyes be saved from committing their adultery.  Let your soul repent for the past and turn back to Allah.  Let it look forward to an amazing journey ahead with a purified gaze, insha Allah.

5 thoughts on “Thou Shalt Lower Thy Gaze!”