Youth Club is organizing a summer camp for sisters that comprises of lots of interesting categories. It’s from June 10th to July 4th, Mondays to Thursdays from 5-7 pm.

Venue is Farooqia Masjid Hall for ladies in F-6/1, Islamabad.

But it’s the categories that are most interesting. Here’s a brief overview of them:

1. The summer camp’s going to have Wing Chun training. Wing Chun is basically Chinese martial art and self-defense. Learning self-defense has plenty of benefits. The most obvious one is that it helps in protecting oneself in untoward situations. But then, it’s also a form of worship. Because your body has a right on you and you’re learning to protect your body. Also, you can use it against enemies or protecting other people. Moreover, Wing Chun makes you strong and active. (What kind of exercise doesn’t?) An active body can worship Allah with more concentration and ease. Not to forget the famous narration of Prophet Muhammad sallallaahu ‘alaihi wassalam, “The strong (active) believer is better and more beloved to Allah than the weak believer, while there is good in both.” (Muslim) An active body does not sink into a bad mood easily. People who do exercise stay more happy and contented than those who don’t. It also releases tension, doctors recommend exercise to those in depression. It also makes you feel good about yourself and increases your self esteem. Okay, I can just go on with benefits of exercise, and then self-defense? Let’s not get started. 😛

2. Tajweed is another segment of the camp. What is tajweed? It is reciting the Quran properly, the way it should be recited and the way it was revealed. Isn’t that beautiful? It was revealed on Prophet Muhammad sallallaahu ‘alaihi wassalam, the best man that ever lived, by Jibreel, the best angel ever. And Quran is the Word of Allah. Imagine reciting His Words beautifully! ❤ And imagine being able to speak English, Urdu and many other languages fluently and perfectly and not being able to recite Allah’s Words in the correct manner? 😦

Moreover, if you don’t recite Quran properly, you’re bound to make mistakes and thus change the meaning of the words. Sometimes those wrong meanings turn out to be horrifying. *shudders*

And then, no music compares to the beautiful sound of proper recitation. It’s the best sound ever! Soothing, relaxing, takes away all worries, makes you positive and wanting to love Allah more. You’ll feel the power of those words when you recite them correctly.

3. Another category is memorization of duas (supplications). Now I love this one. No book needed, no nothing. You’re in a situation and you just read the appropriate dua. Brings such a secure feeling. And real security as well. 🙂

4. Here’s the creme de la creme. Explanation of Surah Yusuf, accompanied with workshops. Yusuf ‘alaihissalam was so amazing that whenever I read about him, I feel I’m getting to know him for the first time. You feel so close to him when you see the things he went through and you can relate so well and find out solutions to your own problems… No words can do justice to his story but here’s a poem that might shed some light on it:

A young boy is our hero, who grew into a fine man
His seeing a strange dream is where it all began

The story ends at the place where dreams come true
But in between, there are many chronicles for me and you

Incidents of a man who always did things at excellence
Even when hurt by his own, he didn’t forego forgiveness

Loved dearly by his father, his brothers threw him in a well
It was a hard time for him but he patiently dwelt

He was found by a caravan, taken as a slave and sold
They didn’t know his worth, for he was more precious than any gold…

Meanwhile in Palestine, his father cried in front of God
He loved his child dearly, but only Allah’s help he sought

But he didn’t betray his master, so loyal was he
The moment he knew her intention, he tried to flee

And the women in the city, what a statement they gave
The wife of Al-Azeez is in love with her slave

So she invited them to a banquet, gave them knives with care
Then she showed him to them and they started to stare

They cut their hands in awe, so handsome was he
Yusuf, the Prophet, is the hero of our story

In good & bad times, from Allah he drew strength of his heart,
In all the things he went through, are signs for those who’re smart

Now if you wanna learn more from the journey of this great man
Just keep calm…. and join Youth Club’s Summer Camp! 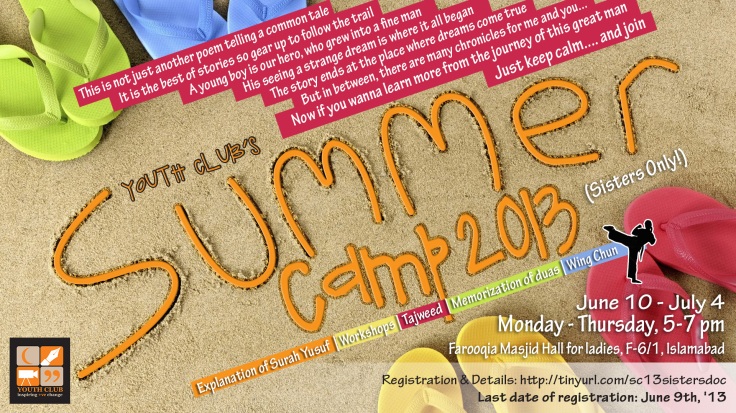